Overnight, storm winds blew through Birmingham, and power was cut off for several hours.

At dawn, our IT people tried to get into the office to restart servers, and this is what they were greeted with: 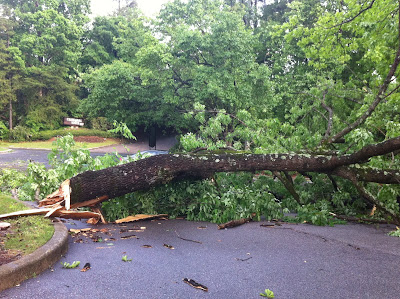 NYTimes article about the storm.

There were also reports of damage at Birmingham's Shuttlesworth International Airport. Spokeswoman Toni Bass said damage was reported to one airport hangar and several trees were down around the airport. Passenger operations were not affected, she said.

Some 269,000 people were without power, most of them in the metro Birmingham area, as of about 8:20 a.m. (9:20 a.m. ET), said Michael Sznajderman, spokesman for Alabama Power, which covers the southern two-thirds of the state. "We're chipping away" at them, he said, but crews may have to pause as the second line of storms approaches.

"Major damage" was reported in six counties, and it appears to be more widespread than that from an April 15 storm, August said. Alabama Gov. Robert Bentley's office was getting a state of emergency declaration ready, she said.

Several school systems were dismissing students early or were closed Wednesday because of the weather, The Birmingham News reported.

So, if you call our Bham offices this morning, don't be surprised if we're a bit behind.
at 8:20 AM

A Decade of NBC Changes